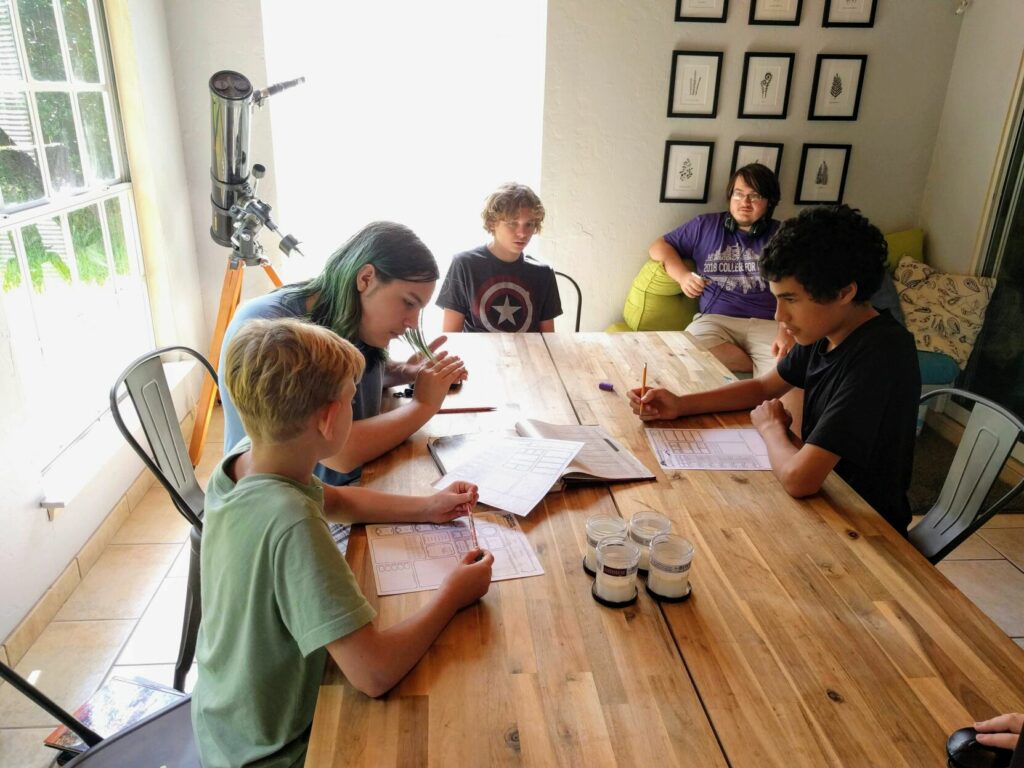 Gainesville resident Callie Williams homeschooled her son until he went to Santa Fe College at age 16. Even though she no longer homeschools, she still moderates a Facebook group called Gainesville Area Secular Homeschoolers.

From that perch Williams saw first-hand the effects of COVID-19 on education. Parents who could not send their children to school—or simply did not want to—were looking for help.

“We had a large bump at the beginning of the pandemic,” Williams said.

Her experience confirms national trends. U.S. homeschooling numbers held mostly steady over the last decade, but the pandemic spawned a jump from about 5.4 percent to 11.1 percent, according to the U.S. Census Bureau.

In Florida, the homeschooling spike was even larger. The Census Bureau’s Household Pulse survey found that 5 percent of Florida households reported homeschooling in May 2020, but that number grew to 18.1 percent by October—the largest percentage increase of any state besides Alaska.

Now, amid a resurgent pandemic and tensions over masks in schools, another homeschooling surge appears to be under way.

“The bump we’re getting now is at least twice the size of the one we got at the beginning of the pandemic,” Williams said. She reported receiving at least five requests a day to join the group, which now numbers more than 1,100 people.

As the group’s name suggests, it is focused on the educational reasons for homeschooling, rather than the religious reasons that motivated most homeschoolers before the pandemic. The group offers resources and support for new homeschooling families, and experienced parents such as Williams talk with parents to give advice about the process.

Students connected through the group also meet up in person for activities like a park day the group used to host on a weekly basis.

Gwendolyn Schmidt, another moderator on the group, says the large influx has benefited homeschooling’s perception, showing that it isn’t as complicated or lonely as some parents might think. But she said the pandemic has changed homeschooling, preventing normal socialization between families.

“Once COVID is over, homeschooling will look a lot different than it does now,” Schmidt said.

She tells families that the loneliness is caused by the pandemic not the education model.

She says a lot of the parents didn’t fully trust that the public school system could adapt properly for COVID-19.

“Even though there were promises and there were safeguards, I think parents were dubious that [schools] would be able to actually implement those things,” Schmidt said.

She said the school system waited until the last minute before making finalizing decisions, leaving parents in the dark.

With homeschooling, parents can select what their child’s education looks like. Parents can choose to teach kids all by themselves, share the task with other parents in a cooperative or use online programs. Or even combine parts of each.

Rachel McCarty serves as a support representative for Classical Conversations, a Christian homeschooling organization that uses a classical teaching model. Students form groups of about 12 and meet once a week to learn collectively. Throughout the week, the students work on projects that they then present at the meetings.

McCarty said the organization has grown year over year for a long time. When the COVID-19 pandemic hit, she saw some families make the switch, and after the 2020-21 school year, at least two of those students went back to an in-person school.

She said it’s hard to tell how much growth is directly from the pandemic and how much is part of Classical Conversations preexisting growth.

Most states, including Florida, do not tightly regulate home education. Critics of the model, some of whom have organized into online support groups, say the hands-off approach has led to instances of abuse and subpar instruction for some students.

But advocates point to evidence suggesting abuse is less common in the homeschooling context, as well as statistics showing that home-taught students consistently score better on standardized tests.

Williams said homeschooling doesn’t limit kids in life and may be better than alternatives. Her son went to UF on a full-ride scholarship and graduated early.

“Most colleges have a very positive opinion of homeschoolers, and they don’t even need a high school diploma to go to college,” Williams said.

McCarty says homeschooling is about customization and parental involvement.

She said many in the group want to teach according to their own worldview without a public school’s secular point of view.

The homeschooling model also allows freedom for the family to travel, which sometimes doubles as hands-on learning.

“I want to be able to go where the places are,” McCarty said. “We’ve been to Plymouth Rock, we’ve been to Jamestown, we’ve been out to South Dakota to Mount Rushmore. We’ve been to places that we’ve talked about and studied.”

Schmidt thinks homeschooling will continue in stronger numbers even after the COVID-19 pandemic subsides.

“I think that a lot more people are going to realize that they can homeschool and how valuable an alternative that can be,” Schmidt said.

She said that even families who switch back to public school now know of the many additional resources available to all families.