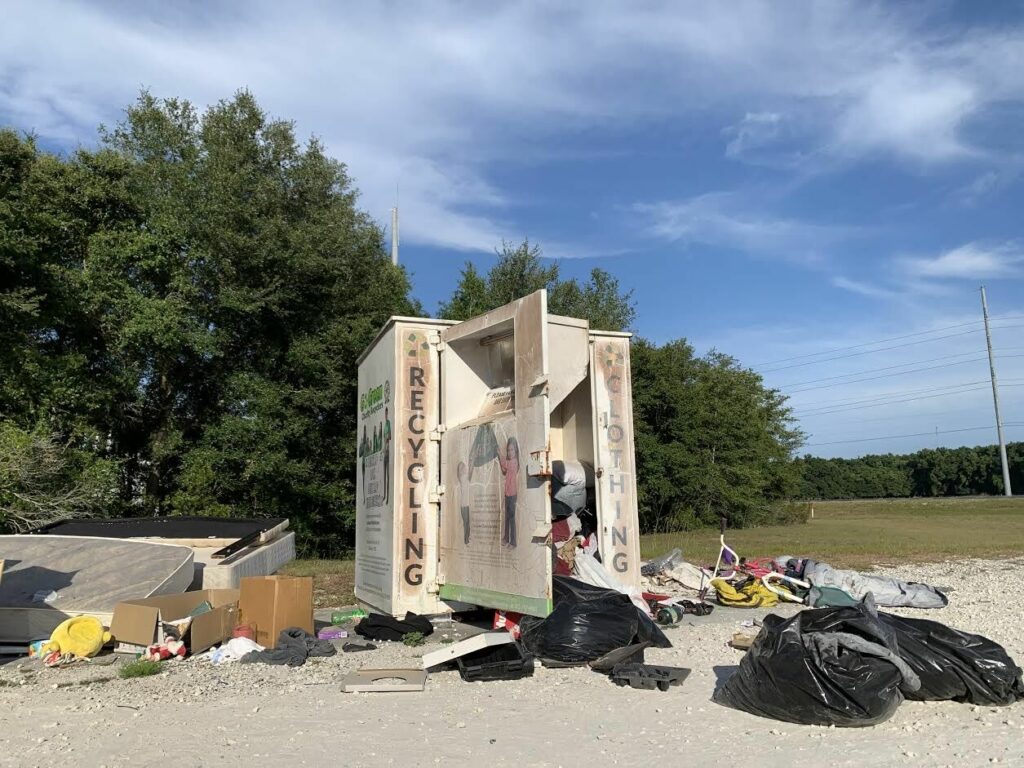 Mattresses, end tables and busted vacuum cleaners sit piled against a recycle bin stationed at the corner of SW 122 Street and Archer Road. The scene is an eyesore to passersby and a prime example of urban blight.

After investigating several bins placed in locations around Alachua County, Mainstreet Daily News discovered companies from South Florida and out of state are setting the bins at various locations without notifying property owners or obtaining permission.

Two weeks ago, a green bin labeled New Hope Recycling was dropped off in the parking lot of the defunct West End Golf. When notified, property owner and realtor Peter Min confirmed that no one contacted him or asked for permission to use his parking lot as a drop off station.

A customer service agent who answered the phone number on the side of the bin said the company that owns the container is based in Atlanta and collects clothing to be bundled and recycled into new clothes. She referred Mainstreet to  www.NewHopeRecycling.com for more information, but the site does not exist. She also promised to send information about the company and bin locations but did not do so.

According to a records search, the green bin dropped off on Min’s property belongs to New Hope Recycling, LLC, which Maurizio Onorato formed on May 24, 2012. That LLC was dissolved a year later. The address listed as the business location is 3481 Lakeside Drive, Suite 2407, Atlanta, Ga., 30326.

There are four of those same padlocked green recycling bins sitting in the parking spaces between the Ace Hardware and Walgreens at the Steeplechase plaza on Newberry Road in Jonesville. On Friday the bins had overflow items, including a small bird cage, boxes and shoes scattered in parking spaces.

According to David Fasano, Southeast Centers Regional leasing director and property manager of the Steeplechase location, no one has contacted him about placing bins in the property.

Fasano is based in Sarasota and said he has had problems with bins like these at other locations he manages.

“Usually there’s a phone number on the box and I call them and say, look, you have 24 hours to remove these,” Fasano said in a phone interview.

Carl Smart, assistant county manager for Public Safety and Community Services is the manager of the code enforcement division in Alachua County.

He said his code officers determined that the bin located on SW 122nd Street near the Archer Road intersection—which is often busted open and has piles of furniture and clothes sitting near it—is actually sitting on Clay Electric property.

Clay Electric said it was unaware that the bin was on its property.

According to Smart and the Alachua County Sheriff’s Office, setting a bin on a property that leads to accumulation of items is considered illegal dumping. Smart said people who set items beside the bins are also guilty of illegal dumping.

ASO spokesperson Kaley Behl said in some cases it would also be considered trespassing, if signs were posted with warnings or there was fencing to keep people off the property.

Florida Litter Law defines illegal dumping as: “In or on any private property, unless prior consent of the owner has been given and unless the dumping of such litter by such person will not cause a public nuisance or otherwise be in violation of any other state or local law, rule, or regulation.”

The law breaks down penalties based on how many pounds a person dumps. Less than 15 pounds of waste is a $150 fine and civil penalty. An amount between 15 and 500 pounds is considered a first-degree misdemeanor with a possible $1,000 fine, and dumping more than 500 pounds is a third-degree felony that carries a possible $5,000 fine.

The label on the bin located on Clay Electric property reads “GoGreen Charity Recyclers” (GGCR) and includes the website www.homedonationpickup.com for more information. That website, too, leads to a domain for sale page.

The phone number on the donation box is answered by customer service for SiriusXM music streaming services, not GGCR.

A Facebook page called GGCR Go Green Charity has no posts and a South Florida phone number that is out of service. An established Twitter account shows posts ending in 2015.

Currently, there is no ordinance in Alachua County addressing these recycling bins, according to Smart. He said it is up to the property owner to clear any dumped items that would constitute an urban blight code violation that the bins often create.

Other counties in Florida have had the same problem and have adopted codes that require bins to obtain a permit and comply with upkeep.

The Pasco County Board of County Commissioners unanimously approved an amendment to the Pasco County Land Development Code in October 2019 to address the issue of urban blight caused by unregulated donation bins.

That amendment established a Donation Bin Permit application process that requires the applicant to submit a site plan, written consent of the property owner where the bin is proposed to go, a schedule for emptying the bin, and evidence that the charitable organization and professional fundraiser is registered to solicit charitable contribution in the state of Florida.

The permit is required to be renewed annually and a permit sticker, along with the organization’s name, telephone number and website of the benefiting nonprofit organization must be displayed on the bin.

It was Pasco County Commissioner Mike Moore who brought the issue of overflowing bins to the attention of the board and pushed to hold the bin owners responsible.

“It’s working wonders,” Moore said. “Previously, it seemed like there was one on every corner. Most turned into dump sites.”

“We have no problem holding the owners of these bins accountable,” he said. “If you place one there illegally and it turns into a dump site, you can expect to be sitting in front of a judge.”

Editor’s note: This story has been updated with quotes from Mike Moore.