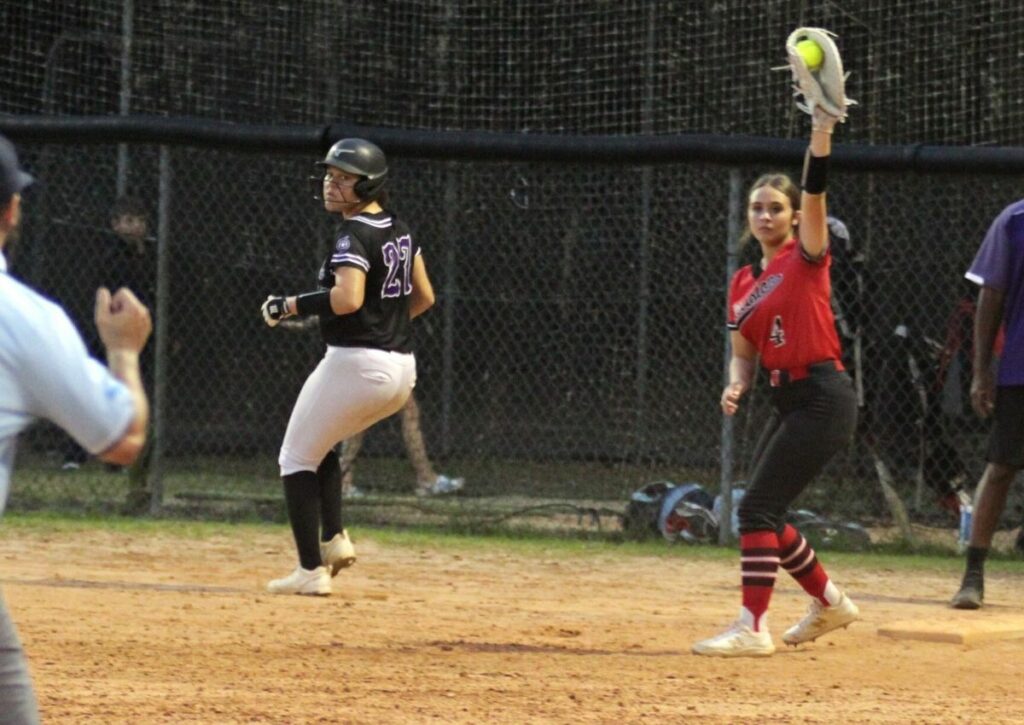 Friday night was a reversal of fortunes for the Williston softball team.

On Thursday night, Class 1A No. 1 Union County scored five runs in the top of the seventh inning to break a 3-3 tie and hand the Red Devils their first loss of the season.

But on Friday, Williston scored seven runs in the top of the sixth to defeat Gainesville, 13-6, on the road.

“It did,” concurred first-year Williston coach Carl Williams. ““In the sixth inning we were sharp and started hitting the ball pretty good. At some point we started small balling. We haven’t been able to get small ball going but we got it working for us tonight.”

The Red Devils (6-1) sent 12 batters to the plate in the sixth inning.

After the first out was recorded, Olivia Davis singled and advanced to third on a stolen base and a wild pitch.

Eighth-grader Baylee Cribbs drove in Davis on a fielder’s choice.

Later in the inning, former Hurricane Cheyenne Boggs walked with the bases loaded and then Savannah Rodriguez, Kendall Smith, Karley Jerrells, and Davis each had consecutive RBI singles.

Davis finished 3-for-4 with a double, an RBI, and three runs scored.

“It was a big night for her,” Williams said. “She’s been struggling the last couple of games. I’m very proud of her. We had a long conversation today at school and she came through for us tonight.”

Williston scored seven runs on six hits, an error, and a walk.

Early in the game it was back and forth.

The Red Devils scored in the top of the first, but GHS answered in the bottom of the first on an RBI double by junior Karter Thorp, who just missed hitting for the cycle, finishing with a single and a triple later in the game.

“I’m really proud of her,” said Gainesville coach Chris Chronister, who noted she was a home run away from the cycle heading into her final at-bat. “She’s a great kid. She had a great night.”

Junior Michaela Cromarty had a one out double and scored on an infield hit by Aa’laysia Williams.

However, Williston answered with three runs in the top of the third inning to tie the game at 4-4.

Red Devils’ sophomore Nevaeh Hayes, who doubled and scored in the first, drove in a run with a single to center field. A throwing error by pitcher Kyra Hornsby also helped plate a run, and Maci Vonderstrasse grounded out to first which drove in a run.

“I saw some shoulders slumping but then some of the girls stepped up,” Williams explained. “We had a little leadership come out.”

After Williston scored a run in the top of the fourth for a 5-4 lead, the Hurricanes tied it up again.

Thorp tripled with two outs and then freshman Braylin Cook doubled over the head of Vonderstrasse in center field to easily score Thorp.

“They would score, then we would score,” Chronister said. “They’re a good hitting team. We knew we were going to have to score some runs to beat them.”

The Red Devils took advantage of two Gainesville errors in the top of the fifth for a 6-5 lead, and they never trailed again.

Gainesville has spring break next week and will return to action on Tuesday, March 29, at home against Santa Fe.

Williston will travel to Branford on Thursday, followed by the Doc4Life tournament in Marion County next weekend.