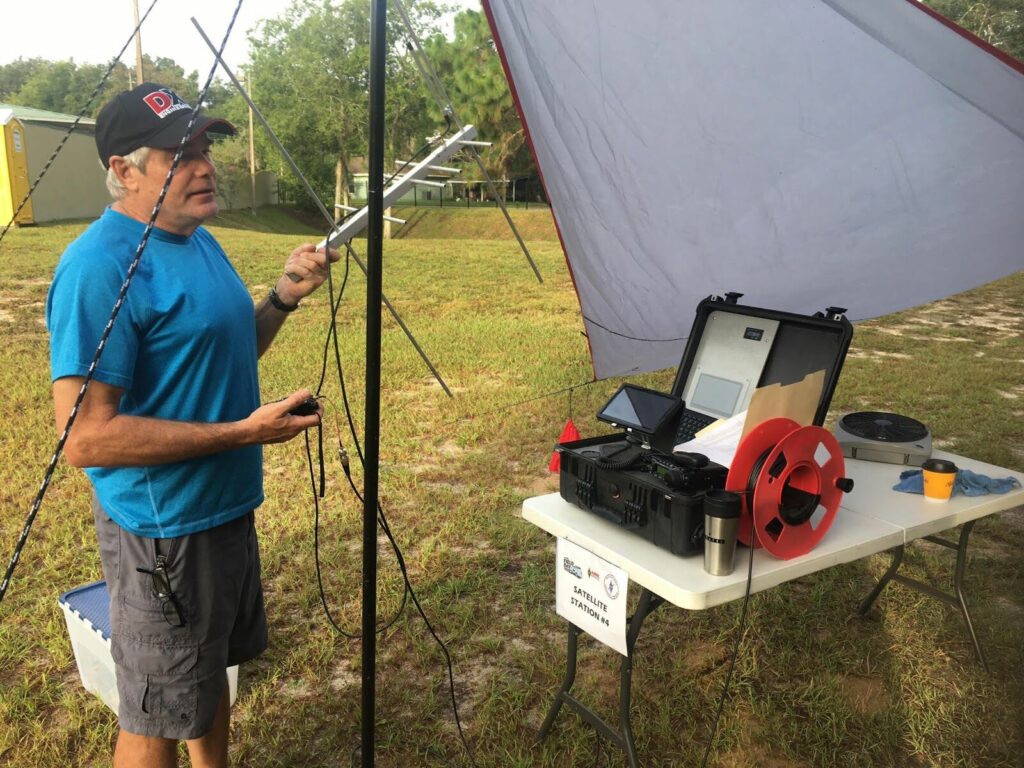 Members of the Alachua County Amateur Radio Emergency Service (ARES) will send hundreds of signals around the nation and even to space during the national Amateur Radio Field Day on Saturday and Sunday.

The field day will take place at the Alachua County Sheriff’s Office (2621 S.E. Hawthorne Road), and the public is welcome to visit, watch and learn with hands-on activities.

While visitors can drop by anytime, ARES will have members ready for them from 2 p.m. to 6 p.m. on Saturday and 10 a.m. to noon on Sunday. Members of the Gainesville Amateur Radio Club will also participate in the field day in Waldo.

The American Radio Relay League hosts the event every year for amateur radio groups around the nation.

Dr. Gordon Gibby is a member of ARES and assistant emergency coordinator with the American Radio Relay League. He said the hams—amateur radio operators—will be sending signals and making connections with a variety of techniques, including Morse code communication, voice communication and digital communication that moves data over radio waves.

The event will also include smaller exercises such as sending radio email without using the internet. ARES will also use solar panels to charge radio batteries, connect with amateur radio satellites and launch slingshot antennas.

“We have capabilities to create communications almost without any infrastructure whatsoever,” Gibby said, explaining how the group would hoist the slingshot antennas into trees using an airgun, ropes and pulleys.

“It’s almost like on a desert island―what would you do?” Gibby said.

While amatuer radio, or ham radio, is a popular hobby in America with over 725,000 licensed hams, the technology also functions as a valuable asset for emergency communication. Many hams volunteer with emergency management services.

“The emergency communications volunteers are a committed group who are granted a wide range of unique capabilities by the Federal Communications Commission,” said Dalton Herding, program coordinator for Alachua County Emergency Management, in a statement. “They leverage these unique capabilities to support public safety efforts across Alachua County.”

Gibby said ARES has around 41 members registered with the volunteer group and 15 are “badged”—meaning approved to work by the state with EMS.

During severe weather, traditional communication networks break down, but ham radio can communicate through almost any conditions. Gibby said the concrete construction of emergency shelters hampers communication as well.

That’s why EMS has placed ham radio units in emergency shelters: Ham volunteers can operate them to keep communication running during disaster situations.

“This is a hobby that accepts anyone,” Gibby said. “It’s extremely low cost to get into. People can spend a good bit of money on the equipment, but you don’t have to.”

The American Radio Relay League has accredited members as young as 9 years old.

Gibby adds that ham radio can also teach kids a lot about modern technology, helping prepare them for the world of commerce and giving them knowledge of electronics and computers.