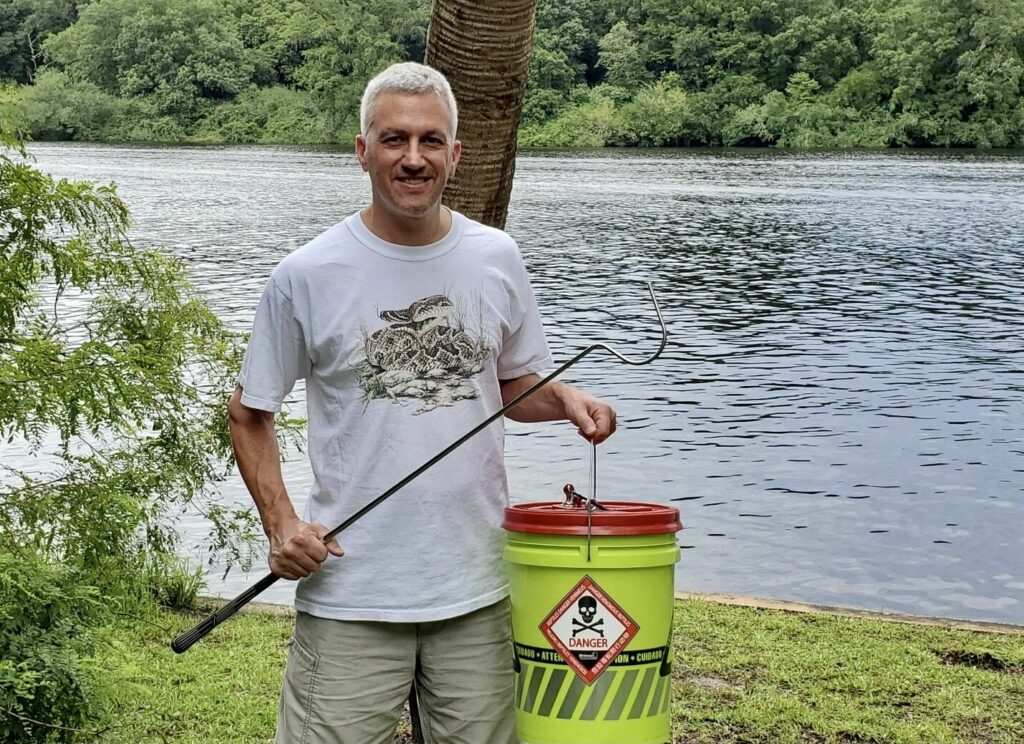 Marc Masio keeps his handling gear nearby just in case he gets a request to remove or relocate a snake.

With a degree in zoology and a background handling venomous snakes while working at the Bronx Zoo, Masio’s motto for his neighbors at Tioga Town Center is unusual: “If you ever have a snake you would otherwise kill, please call me.”

A few times a month neighbors take Masio, who works in sales by day, up on his offer. He’s able to relocate snakes because he keeps his license to “Possess or Exhibit Venomous Reptiles” up to date through the Florida Fish and Wildlife Conservation Commission (FWC).

Masio said most of the calls he goes out on are for non-venomous snakes such as black racers or rat snakes.

“They’re rarely venomous,” said Masio, who added that he can often help people out via text or a phone call. Once he sees a photo and identifies the snake, he said he can talk them through it.

“Most people just want to make sure it’s not dangerous,” he said. “And by the time they’re done with the call, it’s probably not in their yard anymore.”

Masio started his zoology degree at State University of New York (SUNY) Oswego in the 1990s in a program that was linked to Santa Fe College. He took three years of his courses there and finished his degree by taking two years of classes and working at the Santa Fe Teaching Zoo. He met his wife at the SFC Zoo and graduated in 1994.

Masio continues to stay close to a group of reptile advocate friends, so when he has a snake to release in green spaces, he takes them out to their properties for a safe release.

While home for a year during the pandemic, Masio said he went out on a lot of calls, but things have slowed down.

When out on a call, he brings two snake hooks and a pinner to use on venomous snakes so he can grab them while securing their heads.

He also has a tool with a rubberized loop at the end of a handle to secure the heads before he grabs or uses a pair of tongs to place a snake in a 5-gallon bucket with a screw-on lid and a window at the top.

Masio said he had an interesting encounter with a snake in a dryer at Tioga.

He got a call to check on the situation and when he arrived the dryer repairman told him there was a snake in the dryer and took off saying he “doesn’t do snakes.”

“Sure enough a rat snake was in one of the tubes,” Masio said. So he removed and released him in a green space.

The most common venomous snakes Masio relocates are coral snakes.

“In my suburban travels, I rarely see a cottonmouth or rattlesnake,” he said. Masio added that if you do see a rattlesnake, make sure you contact FWC or animal control, because those are rare and it is illegal to harm, capture, or remove them from the wild in Florida, according to the FWC.

One way to stay informed and learn about the local snake population is to join the Facebook group, “What kind of snake is this? Florida.“

Masio said the admins of that group have a background in biology and make sure the IDs are correct. He also recommends joining “Florida Insect, Arachnid, Reptile Identification Group” on Facebook.

Masio said he can be reached via email at cmrmasio@yahoo.com or by searching Marc Masio on the Nextdoor app.