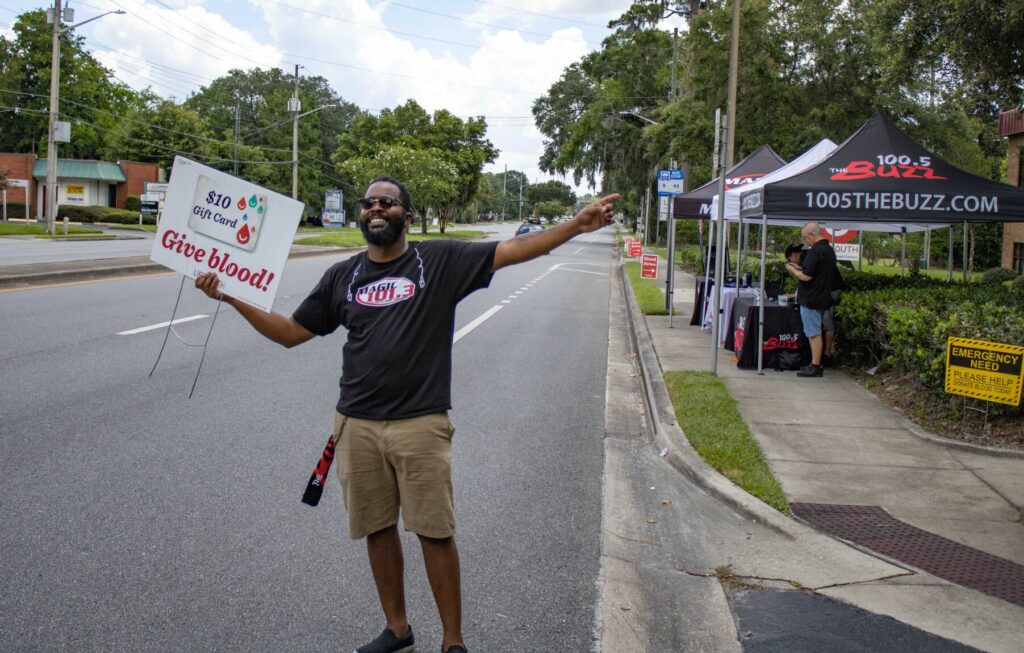 DJs waved to passing cars and held signs in the median while speakers blasted everything from Twenty One Pilots’ hit “Saturday” to “Wonderwall” by Oasis and “Eye of the Tiger.”

“It’s so cool teaming up with all these other radio stations,” said Vinny Foo, program director for Magic 101.3 and R&B 94.1. “The inside’s been full; the outside’s been full; our staff member Cam That Dude from Magic 101.3 has been eating all the cookies. It’s an amazing thing.”

The radio stations joined forces for the event with a goal of getting 100 donors to give a pint of blood. Donors received a free commemorative T-shirt and got the chance to register for two tickets to Universal Orlando.

Larry Wilson, DJ for 106.9 I Am Country and 100.9 Classic Hits, said the event set a lofty goal, and anywhere between 35 to 60 donors would be a great outcome for the first ever DJ Unite for LifeSouth.

“I love the participation with the Gainesville horn-honkers driving by Newberry Road here,” Wilson said with cars zooming past less than 10 feet away.

At the end of the event, 50 donors had come by, along with others who didn’t donate, reaching half of the original goal.

“People are coming in off the streets, ” LifeSouth’s Laura Bialeck said. “They’ve heard it on the radio. They’ve seen the production out here, and they want to be included in the fun,”

Blood donors are needed more than ever following the pandemic and the added strain blood banks feel every summer.

At the 2 p.m. giveaway, Linda Patrick from Gainesville won the Universal Orlando tickets with a parking pass.

“That is wonderful,” Patrick said during an on-air phone call. “I am so happy.”

Patrick said she listens to almost all of the radio stations at the event, switching from one to another throughout the day.

“I’m really appreciative that you actually won because you listen to all of our radio stations,” Foo said on the air.