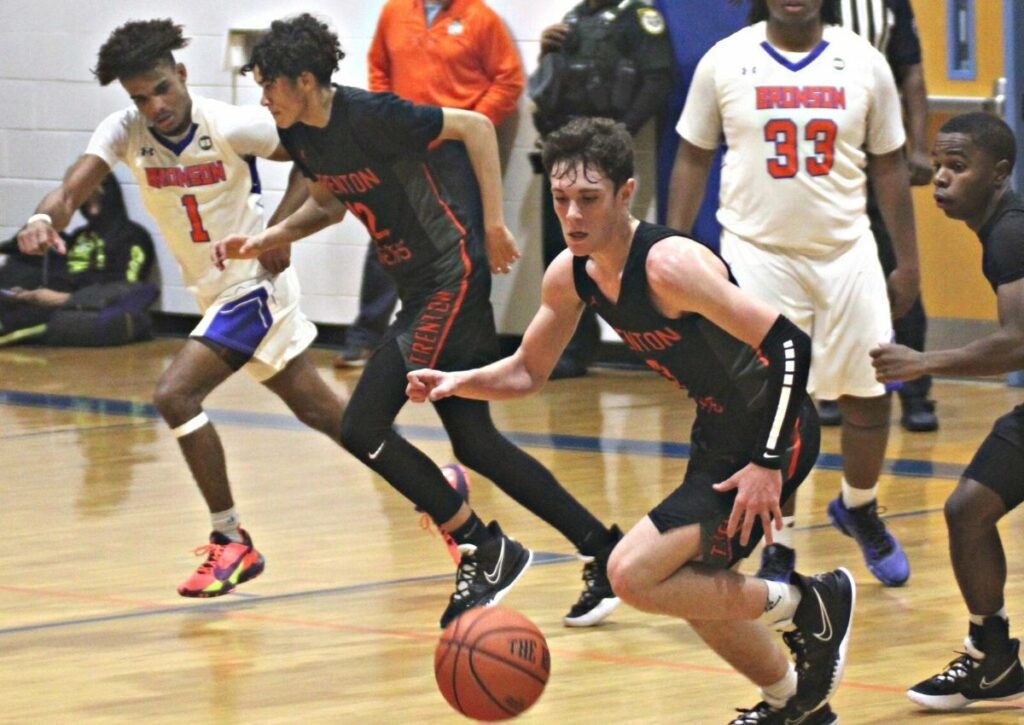 This time they finished the game.

At the time, it was believed that Trenton won the game as the officials walked off the floor with time still remaining. However, the FHSAA has ruled that the game was suspended and likely won’t be completed.

But on Thursday night in Bronson, the Eagles defeated the Tigers, 70-68, to extend its winning streak to six, both overall and in the series.

“What a game,” said first-year Bronson coach Billy McCall. “I’m just so incredibly proud of my boys. It started in practice yesterday. We practiced extremely hard, and I’ve been preaching all season that the way we practice is the way we play, and we are on a six game win streak because of our practices.”

“It’s hard to beat a team who makes 15 3-pointers, especially from two separate players, when we’re playing zone,” McCall said. “We didn’t play man all game. We faced adversity but we pushed through.”

They also hit some big free throws down the stretch.

“I was just ignoring everybody,” said Montero, who scored 17 of his points in the first half as the Eagles built a 40-32 lead at the break. “I didn’t want to let my team down, or my coach.”

He iced the game by making two more free throws for a 70-66 lead with 13 seconds to play.

“I feel like a superstar right now,” Montero said with a smile.

Bronson jumped out to a quick 7-0 lead before Trenton called timeout with 4:57 to play in the opening quarter.

The Tigers (10-9, 1-3) responded by outscoring the Eagles, 18-12, the rest of the quarter. Junior Xavier Jones hit three of his seven 3-pointers in the quarter, finishing with a team-high 21 points.

“It was a hard-fought game,” said Trenton coach Cedric Booth. “We knew what we were getting into. We’ve just got to get better defensively. We’re not asking the guys to be perfect, but you’ve got to match the intensity

Despite the slow start, and a 14-point deficit, Trenton kept battling.

Down 38-24 in the second quarter, Trenton went on an 8-0 run to cut the deficit to 38-32, thanks to sophomore Brandon DeMartino, who scored eight in the quarter, and 8th-grader Nathaniel Ridgell, who scored four of his six in the quarter.

DeMartino finished with 20 points after knocking down six 3-pointers by himself.

It was a barrage of long-range shots in the first half as Bronson made eight shots behind the arc, but none in the second half, while Trenton had six at the half.

It was a game of streaks.

Jesse Williams scored 12 of his 21 points in the second half for Bronson, which will look for its seventh straight win on Friday at Cedar Key.

“We’re streaking at the right moment,” McCall said. “I knew we were going to take a few losses at the beginning of the season because I’m a new coach coming in and they’ve got to get used to my concepts and philosophy as a coach, but right now they’re buying in and it’s looking great.”