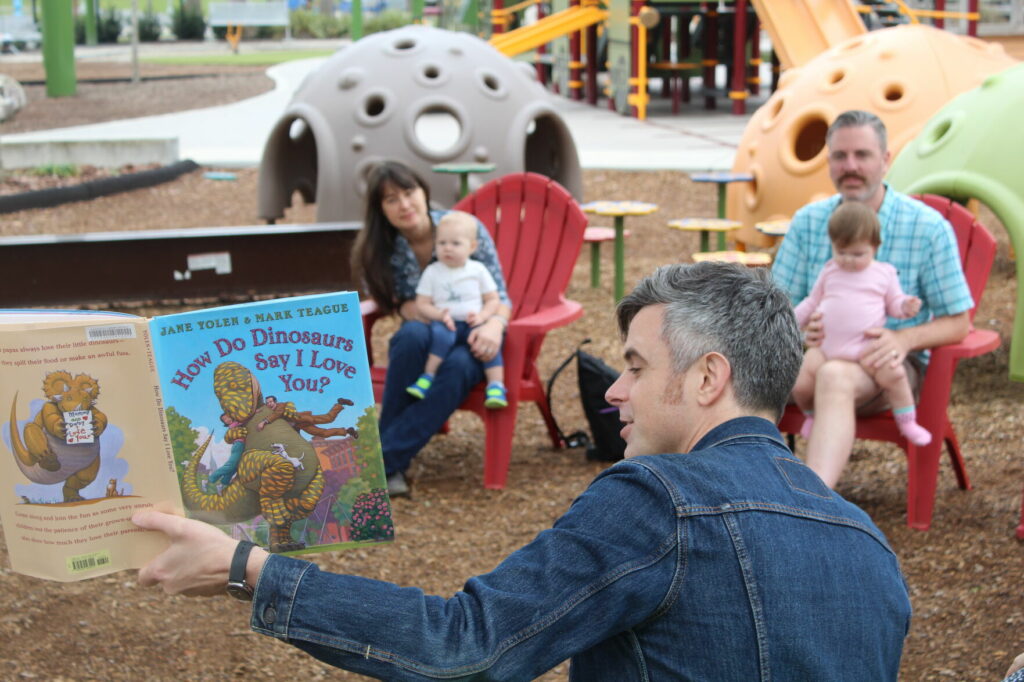 The Alachua County Library District will relaunch in-person programming Tuesday with the return of its popular reading and storytelling events for young children.

Dubbed “Story Time on the Green,” the series is geared toward children from infancy to 5 years old and will feature books, stories and songs in outdoor spaces around the county. Librarians from various branches will offer 12 events each week from June 29 to October 2.

“We have had patrons in the library for a while now, but having story time again is very exciting for all of us,” said Rachel Cook, the library district’s public relations and marketing manager.

“Our team members got very creative in producing these video programs, and many patrons expressed their appreciation for this new venue for the service,” Cook said in an email.

“This particular group is still in that absorption age where they are learning every day,” West said.

Meredith Henry, a library specialist, is part of the team that will organize story time at the Hawthorne Branch on Wednesdays.

Henry said in an email interview that she chooses “colorful, bright, simple” books that fit in with the week’s theme.

“Repetition of phrases, exclamations or sentences makes little people feel so smart—they know what’s coming,” Henry said. “They can chime in after one repetition and help tell the story. This is unbelievably exciting if you are 2.”

Some of Henry’s favorite stories to tell include “The House that Jack Built,” “The Little Red Hen,” and “The Farmer in the Dell.” The librarians often use physical props like puppets, flannel boards and toys to help engage children in the story.

“Children love the sound of the spoken word,” Henry said. “Very young babies are mesmerized, utterly absorbed in the sounds themselves. Older kids love to joke with words, play with them, and manipulate language in every way they can.”

Parents benefit from story time as well, Henry said. They get to bond with other parents, relax with their phones off and watch their children interact and develop important skills.

“Anything that gets the kids engaged, parents tend to enjoy,” West said.

It is no accident that in-person programming returned with “Story Time on the Green.”

“Children are our biggest audience that we do the most programming for,” West said. And the library staff is eager to serve them face to face once again.

“Storytelling conveys what being human is all about,” Henry said. “It is a delight to introduce very new people to the process.”