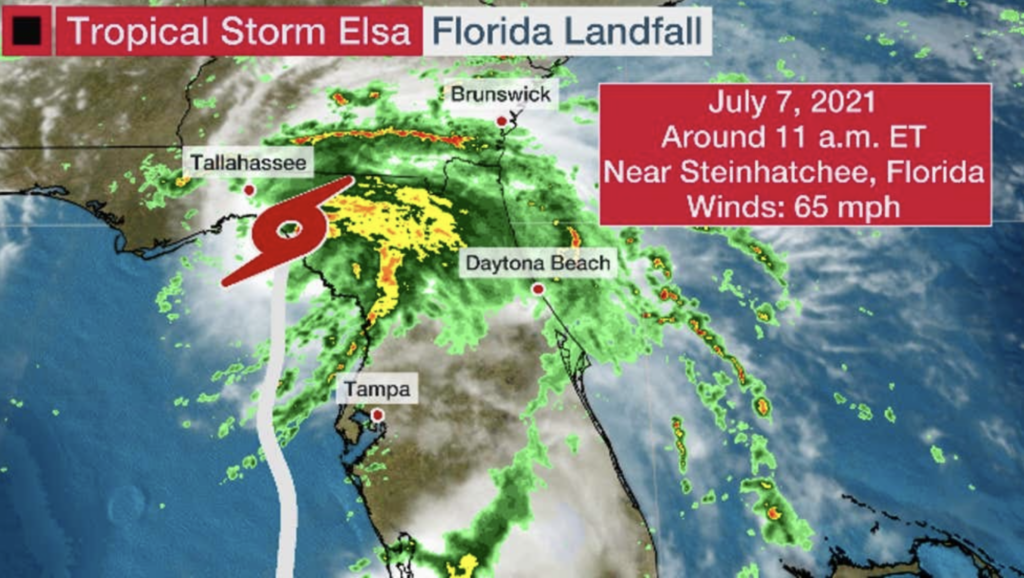 The eye of Tropical Storm Elsa maintained a northward trajectory and skirted Alachua and Columbia counties, but wind and heavy rains on already saturated ground sparked scattered flooding, downed trees and power outages in the area.

Alachua County closed three roads Wednesday afternoon due to heavy water flow, but none have been washed out, the county reported. The roads are 34th Street from Williston Road to US 441, NE 70th Place from SR 26 and NE 77th Lane from NE 179 Street to CR 1469.

“We are prepared and will respond as they come up,” Sexton said in a phone interview.

He said the county is grateful it didn’t take a direct hit but it also isn’t out of the woods. All emergency personnel are working or on standby, if needed.

Hurricane Elsa was downgraded to a tropical storm Wednesday morning before coming ashore around 11 a.m. near Steinhatchee—more than 40 miles north of Cedar Key, which had braced for a direct hit. It moved north into South Georgia Wednesday afternoon, but continued rain makes flooding in North Florida an ongoing possibility.

Columbia County received about what it had expected, according to Shayne Morgan, the county’s emergency management director. He said there were a few power outages reported, mostly around Columbia City and Ellisville, but so far, no dangerous flooding reports.

“So far, we’ve fared fairly good through this,” Morgan said in a Wednesday afternoon phone interview. He said Columbia County has no closure plans for Thursday.

Sexton advised anyone living near large bodies of water to have a backup plan, saying local hotels have openings if citizens feel at risk.

Overall, Sexton said Alachua County has fared better than he was expecting concerning power outages and damage, especially considering the storm was categorized as a hurricane last night and into this morning.

But, he said the county always prepares for the worst and hopes for the best.

Officials are asking citizens to document damage and report downed power lines to their provider:

Alachua County has set up an online portal for reporting damage.